Throughout my life I’ve always considered myself to be “active.” I played sports, coached youth baseball, and did CrossFit training. I thought that I was doing everything that I could do to live a generally healthy life. It wasn’t until I gave birth to my last son and was going through my divorce that I noticed how life had changed. My seemingly small indulges had turned into out-of-control habits. Eating, partying, and let’s not even speak about my drinking. Over the course of a year, I gained around 60 pounds, weighing in at 40 pounds short of 300. What still surprises me today is that I still hadn’t realized how bad off I was. It wasn’t until I began having unexplained health issues.
My first surgery came only 7 days after my 2nd son was born. That surgery was so extensive that I was required to have a nurse come and care for it. I was physically unable to walk and was limited to the amount of care that I could give to my newborn. Eight months later, a 2nd extensive surgery and a 3rd was suggested a few months later. I couldn’t take it anymore. At my consultation I was told that I had Hidradenitis Suppurativa (HS). My only question to him was “How do I control it?” He suggested that I lose and maintain a healthy weight. Later that night, I ran across a Facebook post from a friend. It was her standing over a mountain of clothes that she was giving away due to weight loss and at the end of her post was #Revfit. That is when life changed for me. I walked through the doors of Rev in November of 2017, unsure and embarrassed, but knowing that I had to “lose weight.” Under the direction of Candice and Sandra, I lost the 60 pounds I initially set my 1st goal to be. But that wasn’t enough for me. I wanted more. I switched to Crystal and Apphia in the summer of 2021 allowing me to lose an additional 37 pounds while adding on healthy weight.
This journey is hard!! And honestly for me, it wasn’t the workouts. It was my unhealthy relationship with food and alcohol. And still after all these years, some days I want to give up and fall back into the habits that never truly go away. It is what I stand to lose that keeps me showing up.
Over the years at Rev, I’ve become a certified BodyPump and Crazy Spin instructor. I also teach Tabata and L.A.B. Every day that I walk into the gym, it’s not just for me. I try my best to challenge and encourage the people around me, and if I can reach one, my job is being done. The statement that sticks in my mind the most is, “This journey is not just for you, you have to take someone with you” -Apphia. Four years ago, I walked into Rev with the intent on losing weight, but what I have gained will never amount the number of pounds that I have lost. 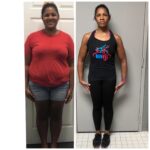 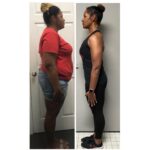 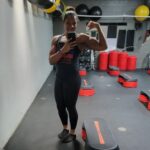