When RevFit moved to Carencro in 2015, It was obvious that there was something unique about the gym. I didn’t know exactly what it was, but I could see drastic physical changes in their members. This seemed to be a gym that achieved results, and I desperately wanted those results but I was also very skeptical.

At that time I was 45 years old, 25 pounds overweight, and the mother of 3 active children that I could not physically keep up with. I felt exhausted all the time. I felt unhappy the majority of the time with my appearance and my lack of stamina. I had tried & failed every diet plan on the market between 1992-2015, so I had lost and gained back the same 25 + pounds more times than I cared to remember.

So what were they doing at this new gym that was so different?

Surely it was just a gym that I would pay a hefty sign-up fee for, attend for 1 or 2 months then lose interest & leave feeling more frustrated and depressed than before, right?

It was with this attitude that I walked through the doors in July 2015 and met my  Boot Camp instructor , Kristan Leger. WOW! I quickly found out that this was no ordinary gym.

Kristan taught me about portion control, (I had never SEEN much less utilized food scale before) accountability ( #vest) & would add weight to the leg press when I was not looking! After 2-3 months of boot camp, she also demanded that I attend 1 of her spin classes! ( she did not give me an option)

Bootcamp was difficult! Weighing in was not comfortable at all. I hated it!! I kept telling myself that I could just follow old patterns and quit.

I didn’t quit because I realized I had become part of something special. Never before had a trainer called me when I missed a class. Never before did I feel a connection to the other members who had similar weight and food struggles. Never before had I belonged to a gym that seemed just as invested in me as I was in it.

So… I kept showing up and the pounds came off. 28 of them! The muscles started to show. Energy and confidence increased. My previous ideas about eating, weight loss, & exercise began to change. “Having “to exercise slowly changed into“ wanting” to exercise.

In 2016 I had an added bonus when my oldest daughter, Olivia, wanted to join bootcamp with me. She was 16 at the time, and within 6 months she lost 60 pounds. She went on to become a certified bodypump trainer at 18 as well as a “crazy spin “ instructor & somehow convinced her mom to do the same! ( #motherdaughterspin). I consider teaching spin with my daughter as 1 of the most fulfilling things in my life.) 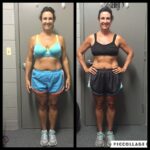